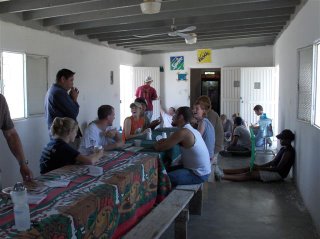 I had the privilege of visiting San Pedro for the first time in June 2006. A missions group, under the leadership of Pastor Walt and his wife, Vicky, were also there with an enthusiastic missions work group from and . They worked in the heat, doing a number of projects to upgrade the buildings on the property. As well, they participated in various aspects of the ministry, including the prison service, the drug rehab program, the Wednesday cell group service and the Friday night youth service. There was also time for some recreation, including nighttime soccer games, an afternoon at a local water park, and shopping in the downtown market.

The ministry in San Pedro is multi-faceted with outreach into a variety of areas in the local community. I found the service in the prison courtyard to be very moving, from the enthusiastic worship to the sincere response to the gospel as it was preached openly by one of the visiting pastors from the States. Stephen Tolman has great favour with the prison officials and is called on frequently in a chaplaincy role. We also met other members of the San Pedro ministry team including Jacob, the assistant pastor, Samy, the youth pastor, and many members of the congregation.

This is God’s work, and our efforts are nothing without the power of the Holy Spirit. That power is evident as the foundation and planting efforts that have been going on for a number of years are now bearing fruit for the .

Posted by Seedtime & Harvest Ministries at 11:30 AM

Do you get many requests for missions visits from the USA?

Yes, we do. People who have been here in the past have told other people about this place, and interest is also raised when we travel and speak in the States, as Stephen in doing now. In fact, it's kind of a semi-joke around here that everyone who visits wants to come back here to live! We love to have visitors and missions teams come see what we do - it makes the work so much more relevant and real if you have seen it for yourself.