We're happy (and amazed) to tell you that we DID make it to the food bank this week - despite our van overheating. Thankfully, we were at the rehab center when it happened, and so we were able to deal with the situation quickly. After running out of food at the last two breakfasts, this week we were blessed with enough food for 130 breakfasts on Saturday morning. We actually saw closer to 150 children come, and while we weren't able to give full breakfasts to the last few, at the very least they received a bottle of yogurt or Jello. Please pray that we will be able to feed all who come, and not just with earthly food, but that God will fill the souls of the children and their families.
Posted by Seedtime & Harvest Ministries at 2:23 PM No comments:

What Are The Odds?

If you've been reading our blog from the beginning, or if you've taken the time to read some of the older posts, you probably know a bit about the children's breakfast we serve in Torreon every Saturday morning. 3 weeks ago, Stephen told me that I would be taking charge of the breakfasts. Every Friday, I have to go to the food bank in Torreon, get what we need for the next day (usually bread, yogurt, and milk), and then drive to Torreon bright and early Saturday morning to serve breakfast. Since I'm still relatively new here, I don't know where the food bank is, so Stephen told Paul and I to go that first Friday. However, when Friday came, we didn't have a car to go in. Fine, we said, we'll go next week. The next Friday 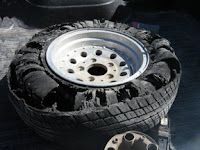 rolls around, and Paul and I set out in our ancient pick-up truck. All is going well until about 20 minutes into the trip, when the truck suddenly slows down for no reason. Well, actually, this was the reason:
So off we trekked into town, called for help, changed the tire, and decided to try again the next week.

The third Friday comes along, and we set off again (in a different car), feeling a bit of trepidation...but we passed the spot where we broke down...halfway to Torreon...success!! We made it to the rehab center! All we have to do is wait for a couple of people, and then we're off to the food bank. BUT, while we're waiting in the office, we get a phone call from Stephen - there's a problem at the bank, and we have to go back to San Pedro to sort it out. So close...and yet so far...so this week, a month after our first attempt, we'll be heading out again - please pray that we'll make it!

However disastrous our attempts to get to the food bank, the breakfasts have been going very well. Three weeks ago we fed about 60 children, two weeks ago about 75, and last week over 120. While we're glad that we're reaching so many people, this week we ran out of food before we ran 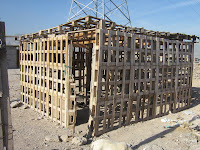 out of people. It's difficult to look at the people and tell them that there's nothing left, although they received the news calmly. To avoid this problem in the future, we're hoping to involve some of our church members in buying beans and tortillas and making burritos to supplement the food we get from the food bank. It will also be helpful when we get the new kitchen built because if we start to run low on food, we will be able to make more on site, instead of guessing how much to bring every week. This is a picture of the new building right now. We are praying that we will be able to expand it further to accommodate more children and more workers.
Posted by Seedtime & Harvest Ministries at 1:58 PM 2 comments:

An update on some recent events:

-In the church, we have celebrated 5 baptisms in the last week, including 3 young men from our San Pedro drug rehab center.

-We are continuing to reach out to needy children and their families in Torreon through our Saturday breakfasts. This past Saturday we fed almost 100 children, almost double the number who came two weeks ago. We are moving forward with plans to build the permanent kitchen facility that we need, in order to provide a safe place for the children to come and eat, and also to allow us to serve even more children every week.

-Plans are also advancing to start a missions training school here. Stephen and Paul have been talking and praying about what classes to offer and what curriculum to use, and tonight we will be discussing the school with our church leaders. At an upcoming conference in March, Stephen will be presenting the plan to other Mexican churches. We hope to open the school in August or September of this year.

-Finally, we want to express our deepest sympathy to the congregation at Christ Church Nashville and the family of Eric Falk, who was the missions pastor there. Eric's passion for the extension of the kingdom of Jesus Christ was exemplary, and though we know he is rejoicing now in the Lord's presence, we will miss him here on earth. Thanks for your great friendship. Our prayers and sympathy also go out to the Tommy Scott family for the loss of their daughter.

Brothers, we do not want you to be ignorant about those who fall asleep, or to grieve like the rest of men, who have no hope. We believe that Jesus died and rose again and so we believe that God will bring with Jesus those who have fallen asleep in him. (1 Thess. 4:13-14)
Posted by Seedtime & Harvest Ministries at 4:41 PM No comments:

“Ahi viene la güera!” “Here comes the blond girl!” As one of only three white, blond people in San Pedro, I hear this, or some variation of it, every time I set foot off the property. When I walk down the street, cars slow down and people turn around and stare – and not just a quick glance, but until I’m not in sight any more. Often people will be walking in one direction while staring in the other – I fully expect to witness some sort of horrific accident one day because someone’s not watching where he or she is going. Usually this attention doesn’t bother me too much, but some days it irritates me to no end. It’s tempting to do or say something rude in return, to let the world know that yes, I can see you looking at me, and yes, I can understand what you’re saying about me. But I know that if I did do something, people would remember for precisely this reason – I stand out. Stephen likes to comment that in San Pedro there’s no way he could ever sin – too many people know him and would find out about it. One day Stephen and I went downtown to run a 10 minute errand, and it turned into a 30 minute excursion because every 5 steps another person would stop and greet him. In the New Testament, Jesus said, “Let your light shine before men, that they may see your good deeds and praise your Father in heaven” (Matt. ). In other words, as a Christian you need to be so radically different that people know who and what you are without you having to say a word. I may not like being noticed, but as I walk around the city I am reminded of Jesus’ words. This in turn helps me accept, and perhaps appreciate, being different – in living here, I’m not representing myself, but my family, my work, my church, and ultimately God.

Templo Libertad update: Tonight is the first night of our new weekly service format. We still have regular Sunday morning and afternoon services, but in response to requests from the congregation, we are consolidating our weeknight meetings instead of holding them on separate days. Every Friday we will meet for a time of corporate worship and then break off into groups for men's, women's, youth, and children's services.
Posted by Seedtime & Harvest Ministries at 2:54 PM 2 comments: