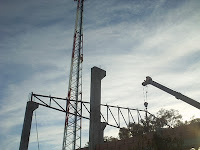 After a short delay, construction has begun again on the new church building. Last week the first roof supports were welded together and put in place. 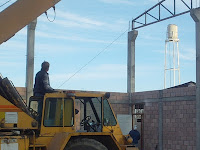 Stephen helping to supervise the placement of the first roof support beam. 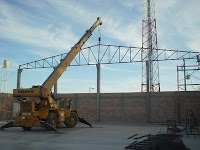 Putting the first beam in place. 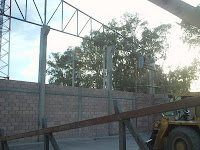 Welding the beam to its support pillars. 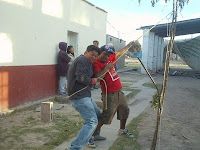 Stabilizing the roof beam while it's being welded. 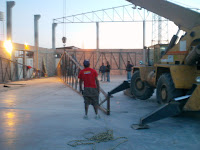 Repositioning the second beam in order to lift and join it to the first one. 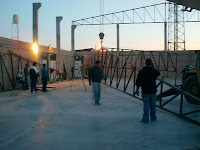 It took a while to accomplish.... 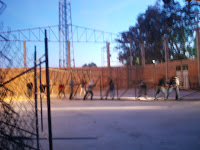 ...and some help from the men of the church.
Posted by Seedtime & Harvest Ministries at 6:56 PM No comments:

We are excited to see continued church growth in Templo Cristiano Libertad! The new church building is still in progress and we're waiting on the roof. This week we bought 40 new chairs because we have been standing-room only, and we have ordered 50 more because the 40 are already filled! Several of our cell groups have received new members and may have to be divided up soon.

Also, a note of thanks to everyone at Destiny Church for another great conference. We were blessed by the services, the fellowship, and the ministry during our time there and we appreciate all the effort and hard work that went into making the week a success.
Posted by Seedtime & Harvest Ministries at 8:26 AM No comments: