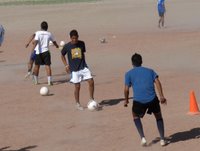 One way that we reach out to people here in Mexico is through our soccer ministry. Stephen and Marcela are president and vice-president of the El Calor organization, which is made up of two professional teams, a girls' team, and children's teams, for a total of almost 150 players. The children's teams are divided up by age level, and the girls' team is open to ages 13 and up. In order to play on the 3rd and 4th division professional teams, players are required to follow a rigorous training schedule and also be in school. The players are exposed to Christ through the examples of the coaches and trainers, through constant prayer, and through the teaching of God's Word. Before and after every practice and game the team gathers for a time of devotion and prayer. Twice a week Stephen holds Bible studies with the teams, and before each of the 3rd division team's road trips Marcela leads a team Bible study in their home. Stephen and Marcela also act as counselors to the players, praying for them and encouraging them to live a Godly life. 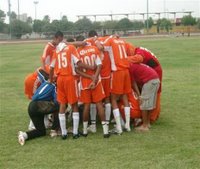 A short time ago we witnessed an example of God's faithfulness in this ministry. On a recent trip to Torreon, Marcela ran into a former Calor player. When he was with the team he was known as a rebel - he had long hair, wore makeup, and painted his nails black. He was not living a Christian lifestyle, and he was influencing other boys on the team to follow his example. When Marcela saw him in Torreon, she didn't recognize him at first, but he came up to her and excitedly told her, "Sister, all of the prayer, the counseling, and the sharing of God's Word when I was on the team have changed my life. I'm a Christian now and I'm serving God with my whole heart. Next week I'm getting married to a girl I met at church. Thank you for your prayers and for sharing God's love with us." God is not confined within the walls of a church - he is present even in the dust and sweat of a soccer field, and he will use all that we give him for his glory.
Posted by Seedtime & Harvest Ministries at 8:38 AM

...an excellent example of lifestyle evangelism.