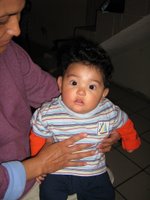 Sometimes we might think that God isn't watching over us, but he always is, even down to the smallest baby that is born. Several months ago, one of the women in our church, Guede, gave birth to a baby boy. Almost immediately, the doctors realized that the baby was very sick - he was born with necrotizing enterocolitis (NEC), a disease that affects the intestines and digestive system (visit http://www.eapsa.org/parents/NEC.cfm for more information). Babies with NEC develop serious complications very quickly, and often die as a result. Guede called Stephen and Marcela, who prayed with her, told the church of the crisis, and then rushed the baby to the hospital in Torreón. The baby didn't die that night, but he remained very ill. While they were in the hospital, another baby was born with the same illness, and she died after only 3 days. The church continued to pray for the baby, and after several days Stephen went to the hospital to pray for him there. God answered these prayers and the baby slowly gained strength, to the point where he was strong enough for the doctors to operate on him and remove the dead tissue. The morning of the scheduled operation, the doctors took an X-ray to check and see how far the disease had spread and how much intestine they would have to remove. What they found was - nothing. The baby was perfectly fine, his intestines perfectly healthy and living. We might wonder why God would allow a mother to go through an experience such as this, or why he would allow a baby to suffer. But now, hearing this testimony, who could look at this baby and deny that God exists, is all-powerful, and cares for his children? 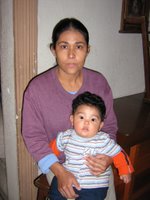 I love the LORD, for he heard my voice; he heard my cry for mercy.
Because he turned his ear to me, I will call on him as long as I live.
Yo amo al Señor porque él escucha mi voz suplicante.
Por cuanto él inclina a mí su oído, lo invocaré toda mi vida.
Psalm 116:1-2