More Than a Game

In a previous post I talked about our soccer team, El Calor, and the difference that this ministry has made in the players' lives. Although the results of this kind of evangelism may not be seen for many years, sometimes there is a more immediate and wide-reaching impact, as in the following testimony.

The first soccer team Stephen started was called Mexico-Canadiense; it wasn't a professional team as El Calor is, but rather a group of teens playing recreationally. Some of the players were extremely poor, so Stephen and Marcela would help them buy equipment and other necessities, and also invite them to church.

Two brothers, Luis and Dani, were the first players on the team to come to church. One day they came crying to Stephen and Marcela because their sister, Clemen, had had a serious accident. She was walking along the top of a fence when she fell and suffered a compound 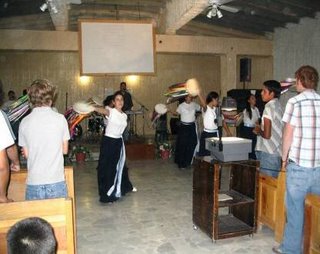 fracture of her arm. They had taken her to the hospital but the doctors refused to help because the family couldn't pay. Marcela prayed for Clemen and then went for help. She and some friends paid for the hospital expenses, and at the hospital they were introduced to the rest of the family. Timothy and Elisa visited the hospital before Clemen's surgery and prayed for her as well. The surgery was successful, and Clemen was released from hospital after several days. The following Sunday, Clemen came to church wth her sisters and her mother, and they all eventually accepted Christ. Clemen and her family are still serving God, and Clemen and one of her sisters are part of the tamborine worship ministry in the church.
Posted by Seedtime & Harvest Ministries at 10:02 AM

we do need to minister to the physical as well as the spiritual needs of those around us...

And it's interesting how God can use one to reach the other - who would think that a broken arm and a soccer team would lead a family to God?

before someone can learn about Christ they have to WANT to learn about Christ, that's why before you witness it can be wise to become friends with the people you're witnessing to. The Soccer team is a great way to do that. Keep up the good work!