Here's what's been happening the last little while in San Pedro:
The second half of the soccer season began on Saturday January 23, with El Calor at home facing a team from Chihuahua. The game ended in a 9-0 victory for us.....last Saturday the team traveled to Ciudad Juarez and despite a poor playing field, came out victorious with a 5-1 score.
We have started construction on a new church building, or rather at this point, destruction, as we have had to knock down a wall to make room for the new building. This past Monday was a 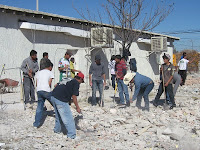 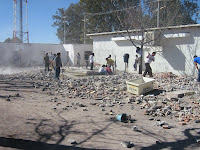 holiday here so a team of young people and men from the church gathered to finish tearing down the wall and crush the cement blocks for later use.

Finally, this weekend we had an update from the girls the church sent to Haiti. They are part of a group of Christian medical workers and they are hard at work caring for the wounded, distributing food and supplies, and sharing the Gospel. Here are two pictures of the team taken at the airport before flying out last Wednesday. They stopped in Cuba and the Dominican Republic on their way to Haiti, and were able to minister in both places, even though they were there only a short time. Please continue to pray for the entire group as they work to help rebuild Haiti.

Posted by Seedtime & Harvest Ministries at 7:51 AM