Sorry about the lull between blogs...here's what's been happening in San Pedro:

-Stephen is traveling in the States, all the way from Virginia to Texas. He will be traveling until the beginning of November, so please keep him in your prayers.

-El Calor played their first game of the season on Saturday, winning 5-0. This week they will be playing in Torreon on Saturday afternoon.

-We are experiencing flooding here in the middle of the desert...sounds strange, doesn't it? Many years ago a large river flowed through this area (hence, it is known as the Laguna (lagoon)) but the river was dammed and now the only thing we have in abundance is dust...we have experienced substantial amounts of rain this year and the dam filled up past its safety point, so the government decided to allow a controlled release of water to bring levels back under control. Traveling along the highway between San Pedro and Torreon, you see cars pulled over at the side of the road and people just standing and looking at the water - actually, the crowds started when the news just came out about the flood, and for several days you could see people just standing in the riverbed, waiting for the water to arrive. Last week the water level seemed to be going down, but this week it is up again, and yesterday we heard that the water might reach San Pedro. This happened about 15 years ago, and I am told that San Pedro became an island, with the surrounding fields and roads covered in water. This morning as I drove to Torreon I saw backhoes and trucks with sandbags and people out digging trenches and building walls to protect their homes and towns from the water. Returning at night I saw how much the water had advanced - in some places it was nearly at the highway, and several houses were flooded. I arrived at the house and Peter presented me with an escape plan: 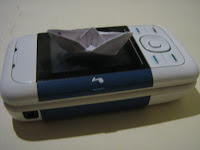 Please pray for our safety as we travel through the path of the river, and pray that the waters would not bring destruction to the region, but instead bring blessing and abundance.

It is great when desert people see a significant amount of water.
People here go out in the rain since it happens so little.
And then they picnic beside the dams that fill up.