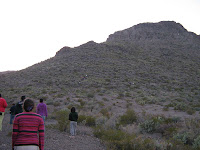 ...literally, "trip to the hill"... and that's what it was. Recently our youth group went on an overnight camping trip in the desert just outside of San Pedro. I went along, not really knowing what to expect - what hill? Are we going to the real desert, or just kind of an out-of-the-way wilderness spot? Are there bathrooms?? Are we going to survive the night???

With these all-important questions unanswered, about 20 of us set off in the bus at 4:00 on a Sunday afternoon. Well, first we had to stop for snacks, then for gas, then to pick up more people....off we went at 4:30, this time for real, and after half an hour on the highway, we turned off on a rough track through the brush. First answer - we were going to the real desert. We 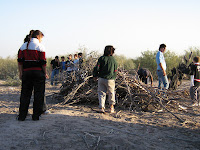 made a brief stop to collect firewood (so this was why they told us to bring our machetes!) and a short time later, we arrived at the hill. Second answer - our campground was a spot between a couple of hills in the middle of the desert. Who decided this was a good camping spot? Does anyone actually know where we are? And, third answer - no bathrooms...

After clearing the ground of cactus spines and checking for scorpions, we unloaded the bus and set up camp. The only person who actually brought a tent was the bus driver; the rest of us planned to sleep in the bus or on the ground. We started a campfire as the sun set and after we 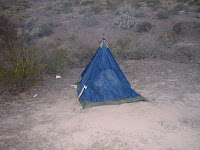 got the coffee boiling, we had a short service. Although it doesn't matter whether you have a service in a church or in the street, worshipping in the open desert underneath more stars than I knew existed made me more aware of God's presence. There we were, a small group of people in the middle of nowhere, who couldn't see beyond the light of our fire, but still God knew exactly where we were. He heard our voices although no one else did, and we felt his presence in the stillness around us. 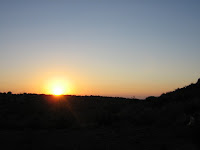 The night passed peacefully - no one got lost, we didn't run out of firewood, and we only heard and didn't see the wolves around us...morning came with a spectacular sunrise, and after breakfast it was back home to San Pedro. Fourth answer - yes, we did survive the night and, more than that, we experienced the presence of God in his creation and in his care of us.
Posted by Seedtime & Harvest Ministries at 8:06 PM